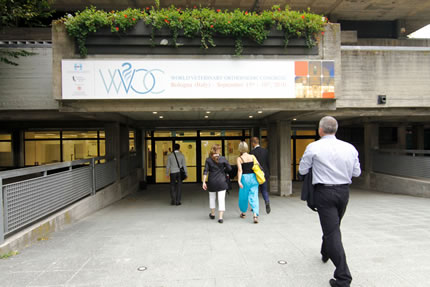 The Third World Veterinary Orthopaedic Congress (WVOC), held in Bologna from 15th – 18th September 2010, was a resounding success and as Chairman of the Congress Committee, I am delighted to be given this opportunity to thank those involved in its organisation, the speakers, the sponsors and the delegates, all of whom played their part in making it an unforgettable experience.

Statistics tell only part of the story, but seven hundred delegates from 44 countries, 80 speakers, four hundred participants in the parallel small animal SCIVAC seminar and a hundred in the parallel equine seminar created a vibrant and stimulating environment that was supported by an outstanding trade exhibition.

The small and large animal wetlabs held at the University of Bologna’s Veterinary School and the concurrent dry labs at the Congress Centre were well attended and there were encouraging numbers at the pre-Congress seminars on Osteoarthritis, Sports Medicine and New Strategies on Pain Control. However, it was the Small Animal Arthroscopy Working Group Seminar, jointly chaired by Prof. Bernadette Van Ryssen & Dr. Jean-Francois Bardet that attracted the biggest pre- Congress audience.

The first afternoon of the congress presented the organisers with an unanticipated, yet welcome, problem – the session on the stifle proved to be so popular that despite four other concurrent small animal streams, the room was overfull and the refreshment areas were crowded. The vibes were good and the infrastructure of the Congress Centre allowed remedial measures to be taken for the subsequent days.

The Opening Ceremony was held in Room Europa, a fabulous 1300 seat Hall that was also to be the venue for the State of the Art lectures. The Pro Rector of the University of Bologna, Prof. Dario Braga, gave an address that was warmly received before Prof. Olivier Lepage, President of ESVOT, opened the congress. 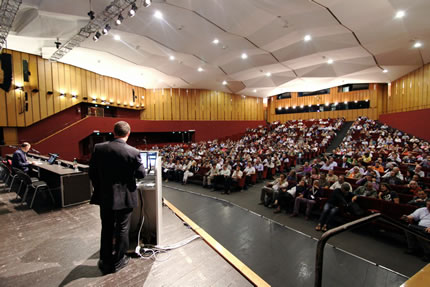 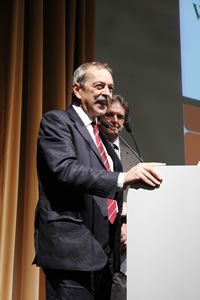 Following the Opening Ceremony, the first State of the Art lecture was given by Prof. Frank Barry on “Stem cell therapy for tissue repair: the stem cell-host interaction”. It seems that neither extensive engraftment nor differentiation of the transplanted cells are prerequisites for a useful therapeutic response.

The second day saw the congress centre bustling with activity as delegates moved between main stream sessions, the in-depth seminars, the SCIVAC/SIOVET Satellite symposium and the Free Communication programme. The Exhibition area was well supported and delegates were admirably refreshed with an excellent variety of hot and cold food served in a light and spacious room. 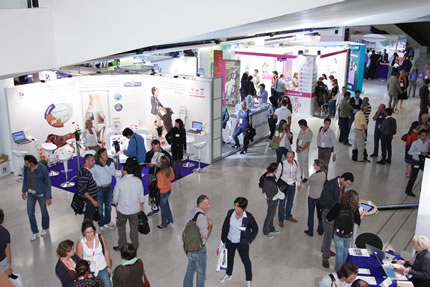 The Exhibition area was popular during the refreshment breaks

The day’s lectures concluded with a State of the Art lecture given by Prof. Stefan Lohmander on “The injured joint and post-traumatic osteoarthritis – What happens, what can we do for our patients?” Prof. Lohmander, from the Lund University, Sweden, indicated there is no high-level evidence in man that surgical resection or reconstruction of the torn meniscus or cruciate ligament will benefit the short term outcome or decrease the risk of osteoarthritis development, as compared to non-surgical management. 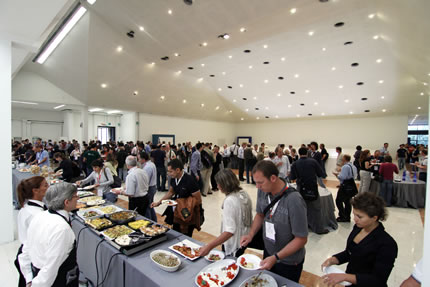 This lecture was followed by the Poster Session where ESVOT provided a prize of €1,000 for the best entry. The worthy winner was Dr Freitas and her associates from Brazil with her poster “Development and optimization by finite element modelling of a bone plate used for treatment of mandibular fractures in dogs”.

After the poster session, the Chief of the Clinical Department of the Veterinary Faculty of Bologna University, Prof Gaetano Mari, kindly invited speakers and their partners to the Archiginnasio of Bologna, one of the most important buildings of the city and seat of the the oldest University in the world. 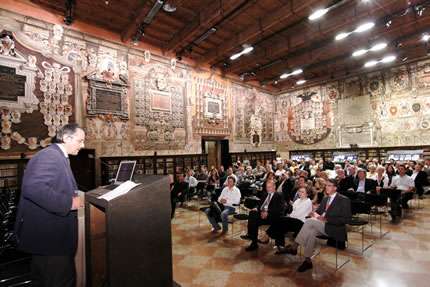 Prof. Gaetano Mari addressing speakers and their partners at the Archiginnasio

Following his welcome, it was fitting that Prof Uli Matis gave a short history of ESVOT, both because of her unique contribution to the Society and because she was retiring from the Board. She reminded the audience that the Society was founded 25 years ago in November 1985 at the Congress of the World Small Animal Veterinary Association in Paris. Dr Jean-Francois Bardet, having been inspired by the activities of the Veterinary Orthopaedic Society, invited some of his colleagues, all interested in orthopaedics and traumatology, to discuss the foundation of a European sister society. And so ESVOT was born! The first Board consisted of Prof. Saki Paatsama as President, Dr. Jean-Francois Bardet as Vice President, Dr. Dieter Prieur as Secretary and Prof Matis as Treasurer. 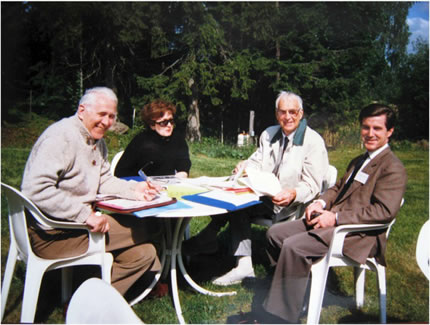 The current health of ESVOT owes much Prof Matis’ hosting of the Society’s meetings at the Ludwig Maximilians University in Munich since the early 1990s, although of course she was far too modest to point this out.

The final day of the congress saw a similar mix of lectures, seminars and Free Communications as the previous day. ESVOT provided a second prize of €1,000 for the best free communication and the winner was Dr Alessandro Boero Baroncelli and his co-workers from the University of Turin for his paper “Effect of screw insertional torque on push-out strength in 5 different angular stable systems”. Of course, neither he nor Dr Freitas were to know of their respective success until the banquet later that evening.

The final theme of the Large Animal Programme was “Joint Rehabilitation” with speakers from North America and Canada, and Prof. Tim Briggs, a Consultant Orthopaedic Surgeon at the Royal National Orthopaedic Hospital Trust in the UK. This led nicely to the final State of the Art lecture where Prof. Briggs gave a fascinating talk on cartilage resurfacing with ACI and MACI.

The social programme concluded with a banquet at the Palazzo de’ Rossi, a very beautiful villa outside Bologna in the countryside. This was a great occasion to cement old friendships, make new ones and to acknowledge the efforts of everyone who had made this congress such a success. Prof Olivier LePage had handed over the Presidency of ESVOT to Dr Rico Vannini at the AGM earlier in the day and these two hosted a wonderful evening ably supported by Dr Aldo Vezzoni, Chairman of the Local Organising Committee. 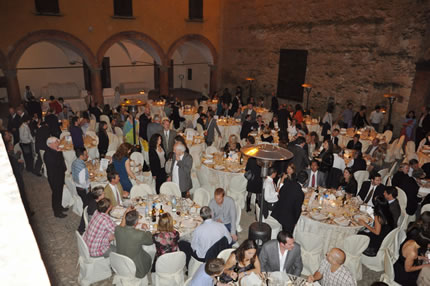 Delegates enjoying the banquet at the Palazzo de’ Rossi 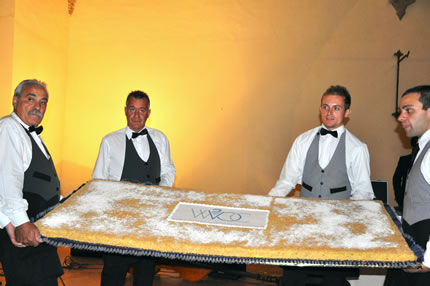 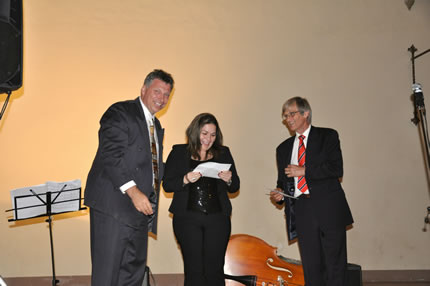 Dr Freitas receiving her prize for the best poster from Dr Michael Schramme, Chairman of the Large Animal Programme 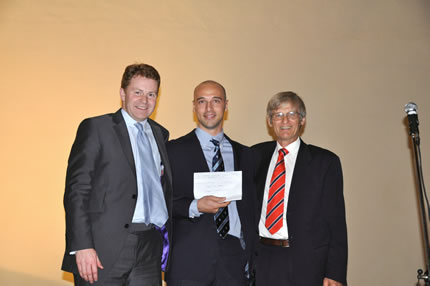 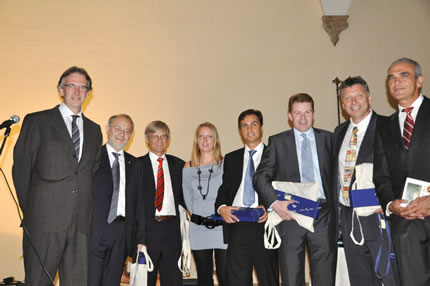 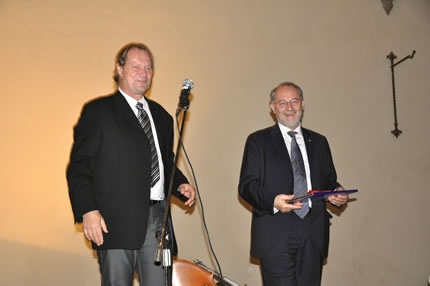 It was Prof Geoff Sumner Smith who initially mooted the idea of a world veterinary orthopaedic meeting and encouraged the respective boards of the VOS and ESVOT to progress the idea. Sadly, Geoff was unable to join the meeting but I am confident he would have been proud of the event. Indeed, as Prof. Mike Conzemius, President of VOS kindly said, “ESVOT has raised the bar and produced a Congress that will be a hard act to follow”. Nevertheless we look forward with eager anticipation to the next world meeting in four year’s time hosted by the VOS.

They made a difference

The pioneer of
modern veterinary

Professor Wolf-Dieter Prieur died on February 13, 2019 at the age of 92. With his passing his colleagues have lost an outstanding figure in veterinary medicine, the AO has lost an individual who was central to the development and the success of AOVET, and his family and friends have lost a man whose humanity and generosity of spirit shone through at even the darkest moments. Prieur was born on January 16, 1927 in Breslau (now Wrocław) Poland.